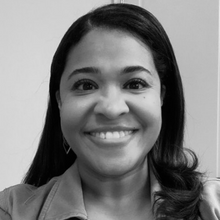 Ingrid (she/her) is a native Southern Californian. Being biracial with mixed Ashkenazic Jewish and African-American heritage, she grew up often feeling like an “other.” This child of the 80s was also determined to be a transformer – more than meets the eye! She received her undergraduate education at Harvard, earned her MD at USC, and completed psychiatry training at UCLA and Cedars-Sinai. Her superpower is seeing and nurturing divine nuggets of potential, whether for healing a person’s soul or a DIY home craft project. Feeling at the fringes of multiple cultures uniquely positioned her to contribute to community (an idea only reinforced by her bat mitzvah haftorah about lepers). Professionally, she does mental health crisis intervention and does consultant work championing neurodiversity. For the past dozen years, she has organized social events that celebrate Judaism’s racial diversity. Like the tzitzit of the prayer shawl, gathering our fringe together reminds us of our connection to the divine.

Ingrid first visited IKAR in 2008, and her involvement has grown along-side IKAR’s offerings. She hosted a glow-in-the-dark oneg for the 20s/30s TRIBE. She met her bashert, David, at a Shabbat dinner and their second evening together was spent in an IKAR late-night Shavuot learning session about ketubahs. After getting married, they co-hosted a house party for Torah study, she dressed like a hamantashen to rap about a “Hat-Shaped Cookie” for IKAR’s Purim shpiel, and most recently they’ve been spotted singing with their baby boy at Bite-Size Zoom Shabbat. Her greatest wish is that her child(ren) be rooted in tradition and grow so vibrantly that divine energy flows through them and radiates from them. IKAR is the Jewish community where this will happen, and she is honored, delighted, and driven to nurture its transformation.