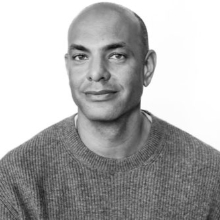 Karim’s introduction to IKAR happened at a PETA Gala. He and his partner were introduced to Rabbi Sharon Brous and David Light. The Rabbi invited him to the High Holy Days. Upon attending, he instantly fell in love with the congregation.

Karim grew up in Akron, Ohio. He was surrounded by a supportive Jewish community. He attended Hillel Academy. He was a member of Temple Israel and NFTY’s Northeast Lakes. Karim is a graduate Miami University of Ohio.

While building a career in fashion publishing, Karim’s philanthropic passion focused on advocacy for the LGBT community. He has worked for the Gay Men’s Health Crisis (GMHC), the Human Rights Campaign (HRC) and served on the board of directors at Hetrick Martin Institute (HMI). Since moving to Los Angeles, Karim has been on the board of the Los Angeles LGBT Center. The Center provides services to more LGBT people than any other organization in the world. On April 7th of 2019, The Center opened the doors of the Anita May Rosenstein Campus, the world’s first intergenerational facility serving youth and seniors.

Karim lives in Los Angeles with his partner Todd Harvey and dog Hawk.