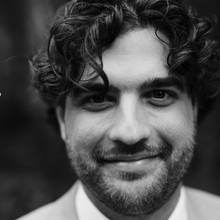 I joined IKAR in 2016 after attending services on and off for a few years. When my then fiancee, now wife, Christy told me she was far more comfortable visiting IKAR than attending services at the shul I belonged to at the time, that sealed the deal. Within a month of joining IKAR, I was leading canvasses for Minyan Tzedek Community Organizing’s election work. IKARites have a way of pulling you in and making you want to get involved. I haven’t looked back since. In 2017, I joined the Community Organizing Steering Committee and this year I became a co-chair. The inextricable link established at IKAR between living a Jewish life and working for justice in the community is why I joined and why my involvement has deepened over the years. In my work with Minyan Tzedek Community Organizing, I’ve helped lead campaigns to make California a sanctuary state, reform policing, eliminate cash bail, steer tax revenue away from prisons and back into communities, and build more affordable housing.

I was born and raised in Dayton, OH, where both my parents served as longtime board members and sometimes presidents of the synagogue I grew up attending. At the same time, my religious education was broad. My mom’s a Jew by choice, a choice that wasn’t finalized until I was 9, and many of my extended family members are devout Roman Catholics. I attended Catholic school through the 8th grade, had a baptism & a bris, a first holy communion & a bar mitzvah. By the time I became bar mitzvah, I was all in for Judaism and Catholicism was in the rearview mirror, but these early formative experiences and the lessons I’ve drawn from being exposed to multiple faiths makes me especially passionate about IKAR Organizing’s interfaith work with LA Voice.

I’m a graduate of University of Southern California’s School of Cinematic Arts (Fight On!). As an undergrad, I organized two Hillel alternative spring break trips (one with the school’s NAACP chapter) to rebuild in Louisiana in the aftermath of Hurricane Katrina. I was also the Obama ’08 campaign’s Southern California campus organizer.

After toiling for nearly a decade mostly as a writer’s assistant, I’m now a working TV writer and have written for shows including CSI:NY, Proven Innocent, and currently ABC’s The Good Doctor. I also teach creative writing to teen boys incarcerated in Los Angeles Central Juvenile Hall, as well as formerly incarcerated adults through the Inside Out Writers program.

I live in Burbank with my wife Christy and our dog Leo.