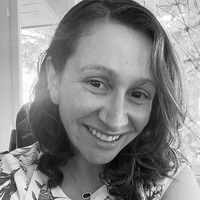 Julia Moss has considered herself an IKARite for more than 13 years. A lifelong Angeleno, Julia was first introduced to IKAR when she was living in Washington, D.C. During a trip home, her brother told her to “come check out this camp-like Shabbat” and she was instantly hooked. Julia likes to say she was the first ever “Ikar From Afar” member because she started coming home so often to attend Ikar that she was asked to serve as the co-chair of the Purim Justice Carnival despite living 3,000 miles away. When she moved back to Los Angeles in 2012, Julia instantly made Ikar her home and has “grown up” in the community: from Tribe (though it wasn’t formalized when she joined) to her aufruf at the JCC to Bite Size Shabbats to the Early Childhood Center to Limudim.​

When Julia isn’t at IKAR, she works as a Learning and Development Specialist in the life sciences following nearly 15 years as a Jewish communal professional for such organizations as the Religious Action Center of Reform Judaism, The Jewish Federation of Greater Los Angeles, Jewish Journal, and The Miracle Project.​

Julia is honored and thrilled to be joining the IKAR board and to be raising her children in a community where Judaism is lived, not just learned.