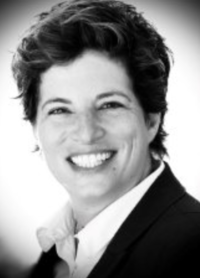 Hannah grew up in Syracuse, NY. When she was 8 years old, her family took a sabbatical to Israel where they connected more with their Judaism, leading the family in the years that followed towards a modern orthodox practice. Upon finishing high school, Hannah attended seminary at Midreshet Lindenbaum and then went on to get a film degree at NYU.​

Hannah’s parents and two brothers moved to Israel as she was starting university and she has had the good fortune to travel back and forth regularly.​

She moved to Los Angeles with her (soon-to-be) wife Kathleen from New York City at the end of 2006 and they got married during the legal “window” before Prop 8 passed in 2008.​

Hannah and Kathleen started coming to IKAR in 2009 on the suggestion of a variety of friends’ suggestions. After being elated at finding parking easily at the JCC on a Friday night only to find out that services were at Roxbury that Shabbat, they made it in time for R’ Sharon’s drasha and to watch services end while young children danced in the center of the room and knew right away that this was the right community for them and for their future family to be a part of.​

They now have two boys, Noah and Enzo who are both alums of the IKAR ECC and who have both spent lots of time dancing in the center of the room at IKAR. Hannah is active on the Hesed committee (never shying away from a dairy/gluten free menu request) and Hannah is a regular morning minyan member.  ​

Hannah has been a talent manager at Framework Entertainment since 2021 following two decades as a talent agent at Buchwald in both their NY and LA offices.